When we look at paintings, our eyes respond to color, line, texture,shape and form, while our minds decipher these elements and their interaction.


If a painting has an illusionistic treatment of subject,then we are led on a specific course of response to that painting.  As words signify things, excite our associative memory, so do recognizable subjects, in painting, arouse our world of associations.


In literary metaphors and allegories, persons, places, things, and events not only themselves but greater ideas. Similarly, ''realistic'' subject matter often performs as symbol.


When a painting is nonrepresentational, that is with no recognizable subject matter, then the viewing experience is based on the quickening of the senses by visual elements such as color, line' shape, and texture.  We respond to works like these through our senses because we have no symbol to relate to.  However our sensory impressions may be converted into emotional states.  Wild gestural brushstrokes convey excitation; gradual transitions of tone suggest quietude; strong verticals and horizontals communicate stability; diagonals establish rhythms, movement a sense of becoming.


The effect is much like experiencing an intense, yet fleeting dream.  We register the emotional state provoked by the dream, although the particular plot and characters elude us.


In the recent paintings by Barry Masteller at the Pacific Grove Art Center, color, line, texture, shape, form and pictorial space are manipulated to inform the viewer of the artist's experience and observation of life. 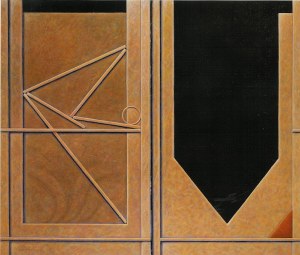 In the four large representational compositions, several visual elements appear repeatedly from painting to painting establishing a repertoire of symbolic devices that guide the viewer through a course of response.  The smaller nonrepresentational works are abstract and suggestive of nature  because the forms and colors are reminiscent of grasses, twigs, fog, and pools of water.  In these too viewer response is stimulated by brushwork, rich modulated colors and interacting forms.


The large works meld idea, form, and a sense of history. Most apparent in these paintings are vast areas of walls, dense areas of black that work as voids - nothingness - when juxtaposed to these walls and carefully rendered sticks that are balanced inside various niches of these walls.


These walls, invariably painted an overall ochre tone, though dappled through with warm reds, oranges and blues, stand dominantly  across and parallel to the picture plane.


They cut off any extensive view of the depicted deep, black space. In all four, the texture of the wall is constant, the persistence of the black void inescapable.  The idea in these works seems to be stability / constancy / control versus the imposing / threatening / unknown.  Decoding these signs tells us something about the artist's point of view.  In ''Tangent" the left half is filled with a wall, while the right half is a small section of wall - a window sill - below a dominant black area, the void.  The wall depicted by strong vertical moldings and horizontal shelves, serves compositionally - and - conceptually - as stable, solid partition between viewer and the abyss.


But is the wall such a stable thing?  The artist has depicted the wall in extreme closeup.  Perspective or any other forshortening of form to show depth and thickness has been avoided.  Balanced within the niche of the left portion are five sticks. These sticks / Boards, the most elemental of building materials, are perched precariously. They could fall at any moment.


The wall Masteller gives us, then, could be paper thin and fragile. It's transitory nature is suggested and reinforced by the unsteady balance of the sticks.  Though we fashion structures from the elements, they remain mere edifices before the great unknown - time.


More subtle references to time - art historical time - exists in the works.  In the 19th century, the Romantic painters reacted against the Neoclassicists.  The Neoclassicists appealed to the sense of reason, of mind over matter, of man over nature.  The Romanticists were  preoccupied with the dark world of dreams, myths, the psyche and the powerful and frightening forces of nature.  The Romantic rhelm was hostile, brooding, exotic, violent; the neoclassic world was pastoral, orderly, arcadian.


Furthermore, all of the works are diptychs - two canvases or panels that are joined togrther to be read as a unit.  Diptychs originated in religeious painting.  Often double doors to alters, tombs, or reliquaries were painted as one composition.  The initial purpose - to set a mood for what was to follow - has been discarded, but the gravity seriousness and spirtual nature of the diptych format seems to persist into our time.  Kirchner, Dix and Beckmann, for instance, frequently relied on diptychs and triptychs to help convey the weight of their message.


Masteller joins these notions in his works; their coexistence is actually unsettling.  The juxtaposition of wall to abyss - of reason to emotion - pervades his work.  As in ''Tangent,''  ''Victory at Sea'' and  ''Gate'', man made walls seperate viewer from the darkness and dominate the composition.  But Masteller renders these walls as fragile partitions, moreover, the black void is as thick as tar, as dense as primordial silence. Indeed, this abyss is as dominant in it's black presense as the carefully crafted wall.


Masteller seems to ask us to decide if these walls should keep us in, or keep the darkness at bay  The other paintings in the exhibition are nonrepresentational, but evocative of nature.  the ominous quality of the large diptychs gives way to a more benevolent interpretation of natural phenomena.  Color is rich, lush forms consist of graceful comma brushstrokes that intersect like network of brambles.  These works with their chordial color and lively brushwork, look like homages to groth, change - nature.  This series, titled ''Natural Occurrence,'' serves as an effective counterpoint to the large wall / abyss vehicles. 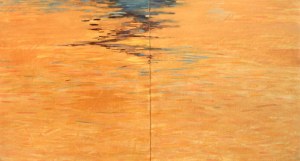 Some artists explore formal elements - color, line, shape, texture - and present, as the final work, canvases covered with the evidence of their explorations.  Smears, scratches, drips, overpainting
all work together for impact. Some artists devise imagery that narrates their message.  Masteller, a consumate craftsman, does not reveal anything that can be identified as ''accident.''  His works seem to be the visual realizations of ideas that are meticulously worked out.


He is like a movie director who controls every scene of his film.  And the film strives to capture the mystery and wonder of man, nature, existence.


All text and images contained on this site copyright:  Barry Masteller 2012